Most in the behavioral psychology world agree that cognitive biases affect every part of our lives, so it is safe to assume that it happens with stocks as well. Lack of focus on selling stocks sounds right as well, but it looks like there is no hard data to confirm this, at least where I looked.

Davidowitz is a data scientist who gained notoriety for his use of the tool Google Trends to compare what we say we are going to do vs. what we actually do. For instance, one of the insights he found was searching for the n-word had the highest correlation to voting for Trump in the 2016 election. For those unfamiliar, Google Trends is a free product that can tell you how popular a search term is over certain time frames. You can also compare the popularity of one search term vs. another.

Investors in debt-laden companies should brace for messy workouts (FT Article)
Article highlights workings which are very similar to 2009 times. I wonder if the magnitude is similar to that. However, my instincts says its not. However, the total debt and money under circulation is another datapoint which I am scared of

Fierce competition from the likes of Amazon took most of the blame for Toys R Us's demise. But observers also pointed to a $5bn debt structure so complex it made a job-destroying liquidation the best choice for the company's creditors. The company could have pursued a reorganisation, but its web of debt and other liabilities was simply too tricky to untangle. 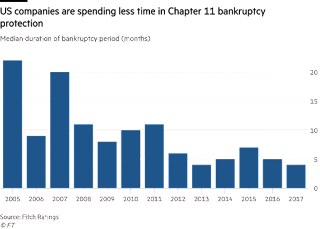 The consequence may be a sharp divide in the type of corporate bankruptcies the next US recession delivers. On the one hand will be smaller companies not owned by PE firms, which can reorganise themselves relatively swiftly. On the other will be billion-dollar companies with PE owners, like Toys R Us, whose byzantine debt structures will lead to lengthy, litigious and very costly bankruptcies. The workout of Toys R Us, for example, cost $200m in adviser fees. These battles may appear to be waged between private equity owners and often sophisticated credit hedge funds, but individual investors are likely to get caught in the crossfire too. In recent years, leveraged loans, a favourite funding tool for buyouts, have become more popular with retail investors, lured by a buoyant market and relatively few defaults. 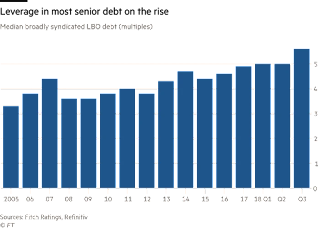 "Going into the last cycle, leveraged loans and high-yield bonds were mainly held by institutions", says Bruce Bennett of Jones Day, referring to the banks and insurance companies that previously dominated ranks of buyers. But between the start of 2016 and the end of 2017 more than $20bn flowed into retail leveraged-loan funds, according to Lipper. Such investors "may not be ready for the effects of higher rates, larger spreads and increased default rates," says Mr Bennett. Another factor adding to complexity: documents on the bonds and loans underpinning buyouts have been written loosely enough to allow companies to move corporate assets out of reach of senior creditors, or to sell them, for the benefit of the PE owner.

A huge wave of defaults may not be imminent. Moody's, the rating agency, expects that the US corporate default rate will edge up to 3.4 per cent by year's end, from 2.8 per cent at end-2018. However, when a slowing economy does eventually trip up overleveraged companies with convoluted capital structures, the battle to carve up whatever spoils are left will be messy, says Jim Millstein, a restructuring veteran who now co-chairs Guggenheim Securities. "Whether there are valid claims or not, it becomes a field day for the lawyers."

Retrospective changes: Changing policy midstream turns off investors (source)
One thing is for sure that Indian Government is not making a well thought out policy. And it seems very clear from various actions that incremental policies will be more tilted towards one group who has grand plans. Whoever wants to exists in India will have to go to this company first and then explore other options if he has the guts to do so.

Restricting foreign investment to just marketplaces was in any case overly harsh, reducing the benefits to consumers and suppliers. Now the government has, midstream, made the rules even harsher. It has also forbidden exclusive merchandising deals — in other words, Amazon India, for example, cannot tie up to exclusively sell a particular smartphone. This had enabled cheap and promotional roll-outs, which benefited consumers. Here, again, the government waited for big investments to come in before changing the rules — changing the return on capital and ensuring thereby that investors feel cheated. Walmart has just put billions in Flipkart, for example. Only days after the government's policy change, Reliance Retail and Jio announced they would roll out an e-commerce venture. In order to insulate itself from charges of favouritism, the government should not only rethink its ham-handed attempts at protection, which will always be seen as favouring big business, but also seek to avoid changing rules in this unfair and retrospective manner.

How the U.S. Could Lose a Tech Cold War: Misreading the lessons of the conflict with the Soviet Union is a good place to start (Source: WSJ)
China is not too dumb to not realize what other countries (mainly US) can do to block their route to dominance specially when they have all the cash (foreign reserve). Full article below.

Today, as the U.S. seeks to deny China access to advanced technologies — in the latest move, U.S. legislators introduced a bill last week to ban chip sales to Chinese tech companies that defy U.S. sanctions — many talk glibly of a tech Cold War, as though there are simple parallels with Washington's efforts in an earlier era to impede the advance of a strategic competitor. That assumption not only misconstrues the Chinese economy, which is nothing like the Soviet one, but gets the Cold War completely wrong. A key lesson from that confrontation is that it's extremely difficult to ring-fence technologies and prevent their export to a rival. The challenge is immeasurably more complicated in today's hyper-connected global economy. Indeed, any attempt to reprise the actual Cold War will almost certainly end up hurting the U.S. economy and those of its friends and allies as much, if not more, than China's.

China is not the Soviet Union: In many areas of technology, including AI, it's already close to parity with the U.S. And misreading the Cold War will inevitably lead to misguided policies. While the U.S.-led technology blockade may have slowed Soviet expansionism, the Soviet system ultimately collapsed under its own weaknesses — lack of innovation, a chronic shortage of consumer goods, inept central planning. None of these are obvious Chinese failings. It's one thing to convince China to halt its state-sponsored theft of commercial secrets, stop forcing multinationals to hand over technology in exchange for market access, and scale back its mercantilist ambitions to dominate the technologies of the future. This is only asking China to play by the same rules as everyone else as it pursues its goals. Security concerns, on the other hand, require a different, more targeted approach that seeks to minimize both the threat and the harm to the U.S. economy. Susan Shirk, a former Deputy Assistant Secretary of State during the Clinton administration, sensibly proposes a "small yard, high fence" approach: Narrowly define technologies such as long-range radars, or advanced turbofan engines, whose loss could endanger U.S. national security, and then aggressively protect them. In a similar vein, it makes more sense to punish individual Chinese companies that benefit from technology theft rather than resort to blanket measures against entire industries. Above all, the U.S. should focus on its own industrial competitiveness. "For every dollar we spend on containing China, we should be spending on our labs and innovation centers," says Gary Rieschel, the founder of Qiming Venture Partners and a pioneer U.S. investor in the Chinese tech sector. He adds: "The U.S. does not do defense well."

Chart: The Evolution of Standard Oil - ROCKEFELLER'S JUGGERNAUT WAS SPLIT INTO 34 COMPANIES (Source) 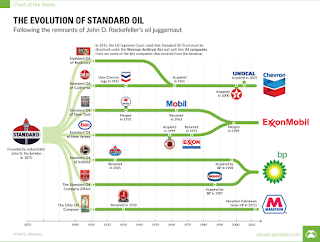 Near the top of that list in 1917 is The Standard Oil Company of New Jersey, which is just one of the 34 forced spin-offs from the original Standard Oil juggernaut that was split up in 1911. In this chart, we look at the "fragments" of Standard Oil, and who owns these assets today.

MONOPOLY DECISION
At the turn of the 20th century, John D. Rockefeller's Standard Oil was a force to be reckoned with. In the year 1904, it controlled 91% of oil production and 85% of final sales in the United States. As a result, an antitrust case was filed against the company in 1906 under the Sherman Antitrust Act, arguing that the company used tactics such as raising prices in areas where it had a monopoly, while price gouging in areas where it still faced competition. By the time the Standard Oil was broken up in 1911, its market share had eroded to 64%, and there were at least 147 refining companies competing with it in the United States. Meanwhile, John D. Rockefeller had left the company, yet the value of his stock doubled as a result of the split. This made him the world's richest person at the time.

RESULTING COMPANIES
The company was split into 34 separate entities, mainly based on geographical area. Today, the biggest of these companies form the core of the U.S. oil industry:
But that's not all – the Standard Oil asset portfolio also carried some other interesting brands that you'd recognize today:

Yes, even Vaseline was originally a part of Standard Oil. Inventor Robert Chesebrough derived the product from petroleum residue, and the spun-off company (Chesebrough Manufacturing Company) was purchased by Unilever in 1987. Meanwhile, the Union Tank Car Company is a part of Berkshire Hathaway today – and Pennzoil is owned by Royal Dutch Shell.

If you believe "experts" have enough foresight about financial events to make a meaningful difference. Unfortunately they don't. After reviewing brokerage reports, you will quickly realize most of what passes for financial advice and forecast is really 'financial fiction' (Source: Tweet from Pankaj Baid) 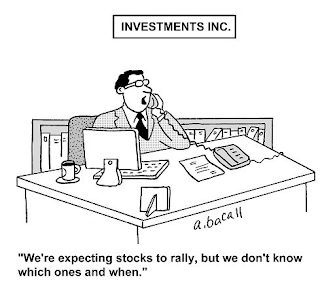 !During the last severe stock market correction in 2015, US #earnings growth turned negative, but no #recession followed (Source) 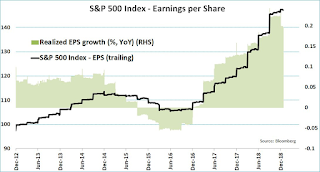